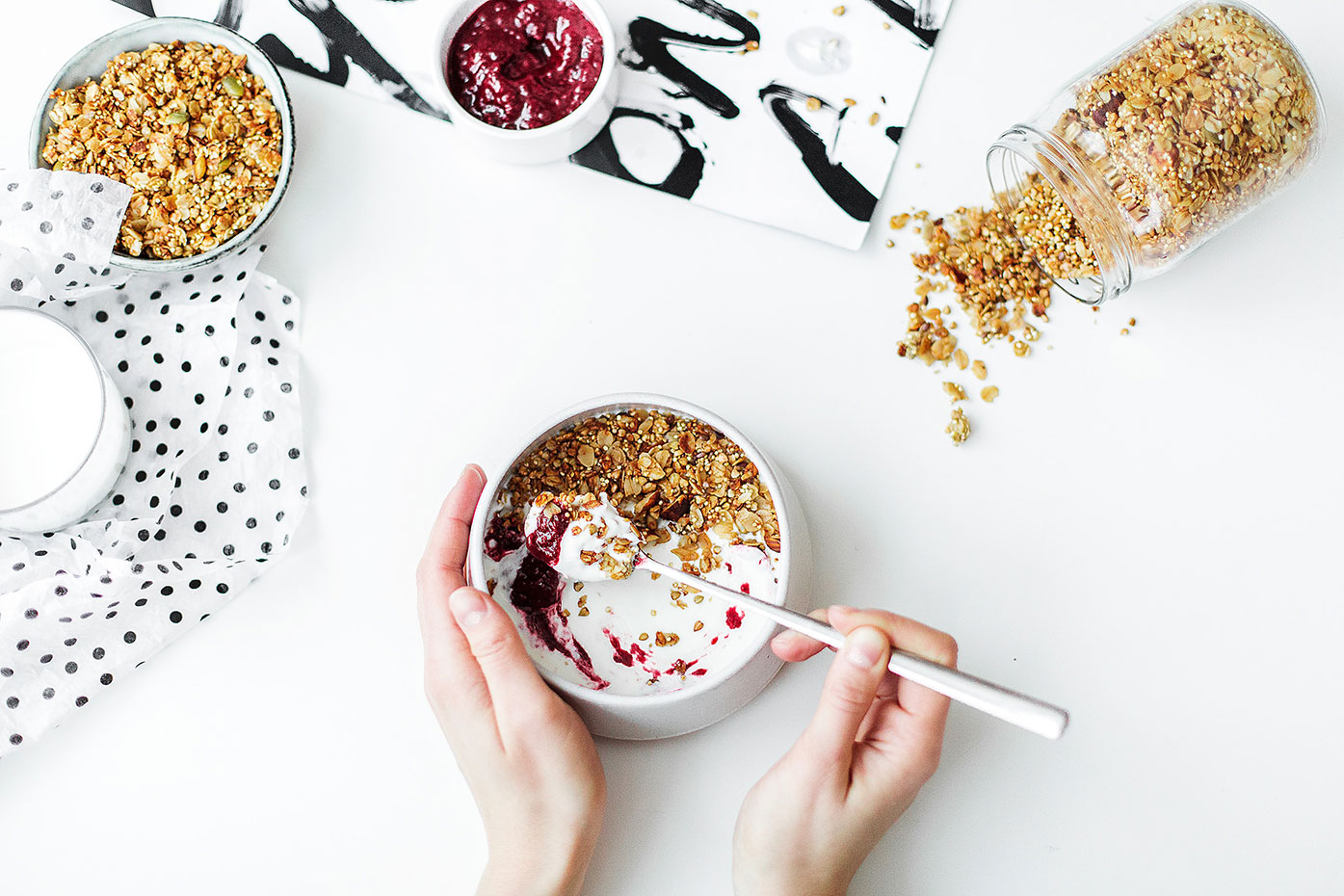 It’s dark, vast, mysterious, and teeming with life. It’s your gut, and it’s host at least one trillion bacteria.

There’s still much we don’t know about the role of our gut microbes. But what we do know is this: that good gut health is essential to your immune system, your physical health, and your mental health. And that keeping your gut bugs happy will likely make it easier for you to lose weight, to fall asleep and stay asleep, and to better handle stress.

Much like us, these tiny critters that have set up home in our colon thrive on the right blend of food, activity, and rest. If you want your gut bugs to flourish, make a habit of doing the following.

“Fibre is the food of choice for beneficial gut bugs,” says nutritionist Dr. Joanna McMillan, “But most of us just don’t get enough, and so neither do our microbiomes.”

You’re a source of nutrition to the microbes that live in your gut, which is why they are there. They particularly love the food that you cannot digest, and happily break down tough plant foods, in return making substances that power your cells and protect your immune system.

“Fibre is the food of choice for beneficial gut bugs,” says nutritionist Dr Joanna McMillan speaking on the ABC’s Catalyst program. “But most of us just don’t get enough, and so neither do our microbiomes.”

While any type of fibre is beneficial, there’s a specific type of fibre loved by our gut microbiome, explains Dr McMillan. It’s called prebiotic fibre, or resistant starch. Foods high in this fibre include oats, lentils, chickpeas, barley and beans, and some fruits and vegetables (bananas, onions, garlic, leeks, asparagus, and Jerusalem artichokes).

Some of us may shun these carbohydrate-rich foods if we want to lose weight, but we could be short-changing our gut bugs in the process. Says food and mood expert Professor Felice Jacka from Deakin University: “Have a bit more complex carbohydrate in your diet. We often learn to skip the carbs, and have just meat and vegetables. While you might lose weight in the short term by doing that, you’re not going to be doing your gut bugs any favours.”

Intermittent fasting hit the headlines a few years ago as the latest, greatest way to quickly shed kilos, thanks in part to British journalist Michael Mosley’s 5:2 Diet. But it turns out that fasting can also help boost some particularly beneficial gut bugs.

Associate Professor Andrew Holmes of the Sydney University’s School of Life and Environmental Sciences explains that there are certain gut bugs that live off the mucosal secretions lining our gut, rather than the food we eat. These bugs produce substances that reduce inflammation, he says, and prevent more harmful bugs from gaining a foothold. Intermittent fasting can favour the growth of these bugs, help to maintain a healthy gut, and, it turns out, reduce the risk of obesity.

Scientists are now investigating possible connections between the microbial world of our gut, and how we sleep. They are finding not only that gut microbes can affect the quality of sleep, but that sleep, in turn, may affect the health and diversity of the human microbiome.

Gut microbes are constantly dying and being generated. Some of this decay and renewal naturally occurs during sleep, says sleep expert Dr Michael J Breus.

“Exercise can have an effect on your gut independent of diet or other factors,” says Professor Jeffrey Woods, of the University of Illinois.

He led a study which found that mice who exercised had a higher proportion of beneficial microbes that reduced inflammation and generated energy for the host.

A human study had similar findings. Sedentary adults who followed a supervised cardiovascular exercise program for six weeks experienced a significant increase in microbes that produced beneficial compounds such as the short chain fatty acid, butyrate.

Gut bacteria have been linked to diseases like inflammatory bowel disease and even to asthma, and for some time we’ve known that these diseases tend to be worse during periods of pressure. Recent research may shed some light on why.

According to a study published in the journal Brain, Behavior and Immunity, exposure to stress led to changes in the composition, diversity and number of gut microorganisms. The bacterial communities in the intestine became less diverse, with a greater number of potentially harmful bacteria.

The researchers believe that not only does stress change the bacteria levels in the gut, but that these alterations, in turn, impact our immunity.

So just as our body and health responds to stress-reducing techniques such as meditation and yoga, so may our gut bacteria.

In a pickle over fermentation?

Sauerkraut, kimchi, kefir, yoghurt and kombucha – these are all types of fermented foods that are said to benefit our gut bacteria.

But what about plain old cucumber pickles that you can pick up in the supermarket, or a simple pickled vegetable side dish made with vinegar. Are they as good for you?

Fermenting and pickling are ancient ways of preserving food. Some fermented foods are pickled, but not all pickles are fermented.

A pickle is a food that’s been preserved in a brine (salt or salty water), or an acid like vinegar or lemon juice. A fermented food has been preserved and transformed by bacteria. The bacteria eat the sugars and/or carbohydrate present in the food, converting it to other substances like acids, carbon dioxide, and alcohol. These substances act as food preservers and add to its flavour.

When you eat a fermented cabbage dish such as kimchi or sauerkraut, you also eat the colony of good bacteria that has helped preserve the cabbage for you. These bacteria are believed to help replenish the good bacteria in your gut, and so they are considered a ‘probiotic’ food.

But not all pickles are fermented. You can make pickles by pouring hot vinegar over vegetables – these are not fermented so don’t have the same health benefits. Neither do most of the commercial pickles you buy from the supermarket, which are simply preserved in vinegar and then heat treated.